A five-course meal, with each course at a different restaurant

It’s normal to stop in one of the abundance of great restaurants on East Passyunk Avenue for a multiple-course meal with a reservation, but how about a five-course meal, with each course at a different restaurant?

The Passyunk Avenue Revitalization Corporation and the Commerce and Streets Departments are planning to install a more pedestrian friendly infrastructure, bring the curb cuts into compliance & modernize traffic signals.

“This intersection is a pedestrian nightmare,”

Fortunately, by this time next year, the harrowing experience that is crossing 12th and Passyunk on foot will be nothing but a long-forgotten bad dream. Here’s why: it’s in for some serious pedestrian-friendly upgrades.

Never mind that grazing at the Reading Terminal Market is...

The Philadelphia tourist attraction, an expanse of 80 or so vendors below a former train shed, is where Rick Nichols says we should meet for lunch, and if the city’s unofficial food ambassador says to eat it, you’d best bite.

You're looking at one hot real-estate micromarket. Arguably, the hottest of all the spots south of Center City now jumping off the sale-price charts, as documented by local Realtors and residents, Philadelphia transaction records...

One by one, the wonky intersections along East Passyunk Avenue are starting to be transformed into pedestrian-friendly plazas. If you're a regular at Birra, Bing Bing Dim Sum or Cantina Los Caballitos, you better pay attention.

Palladino's has great respect in it's four-month existence

In 1989, Luke Palladino graduated from the Culinary Institute of America. He flew to Italy and learned much about the culture and cuisines of its regions. He opened Palladino’s on Passyunk, 1934 E. Passyunk Ave., in December.

Philadelphia's population grew for the eighth year in a row

Northern Italian with a chop-house twist

It is hard to imagine a need or niche that is left for another new Italian restaurant in South Philadelphia. But that didn't deter Luke Palladino, who picked up one of his prosciutto-wrapped, truffle-buttered bread sticks...

Passyunk Triangle to be Rebuilt

Triangle at Passyunk and Mifflin to be rebuilt.

The Passyunk Avenue Revitalization Corporation, which was responsible for turning the area around the fountain at Passyunk and Tasker into a usable space, plans to take its methods to another triangle a few blocks down...

Talking 'the Avenue' with Lynn Rinaldi

Lynn Rinaldi grew up on "the Avenue." Then she helped save it as a restaurant pioneer whose Paradiso helped spark a dining resurgence that has become the East Passyunk Avenue phenomenon...

It's true that you didn't have to come from South Philadelphia or be an ethnic Italian to win Sunday's first-ever Red Gravy Cook-off, sponsored by the East Passyunk Crossing Civic Association...

Now in its third year, the restaurant week will feature specially priced menus from 28 East Passyunk restaurants. These three-course brunch, lunch and dinner options are priced $15, $25 and $35 each...

“I’ve had my eye on opening in Philadelphia for a long time,” said Chef Palladino. “After searching for the perfect space and waiting for the right opportunity...I had been watching the culinary scene grow and thrive...

Reign over for the King of Jeans

The end of a reign rarely comes without death. But the King of Jeans apparently will have an afterlife...The 16-foot-tall sign evokes an era that precedes East Passyunk's commercial resurgence...

In a city where the eating is as good as it is in Philly, naming 50 great restaurants is a cinch. Naming the 50 best, and doing it in order? That’s tougher, but it’s what we’ve done here...

We expect a lot from restaurants these days. If they don’t transform liquids into powders or barrel-steep cocktails with homemade bitters, they’d better serve chickens that roamed freer than our children do...

PureDesign florist shop is moving into the space at 1820 East Passyunk Avenue. Crews are currently working on the interior of the building, although an opening date is not yet known.

And Why Cities Are Right to Pay Them So Much Attention

Millennials are something else again. Characterized, fairly or not, as competitive and driven, entitled and narcissistic, thoroughly technology-savvy, and more practical than ideological, they are finding their way...

Which counties are seeing an influx of millennials? Which are seeing rapid emigration? And where the heck are baby boomers going? RealtyTrac’s latest report answers these and other questions after analyzing Census population...

East Passyunk Ave has become one of the trendiest places

Over the past decade, the East Passyunk Avenue commercial corridor between Broad and Dickinson streets in South Philadelphia has become one of the trendiest places in the city to shop and dine.

Eater Philly sat down with chef-owner Lachman to talk about how Philly's changed since he lived here last, being a part of the East Passyunk restaurant boom, and all the most memorable moments from Noord's first year.

With the goal of better identifying entry into the area...

To match the East Passyunk neighborhood’s recent growth — new restaurants (from award-winning chefs), unique shops and awesome festivals...the space in front of United Savings Bank, is soon to be a multi-purpose space for all. 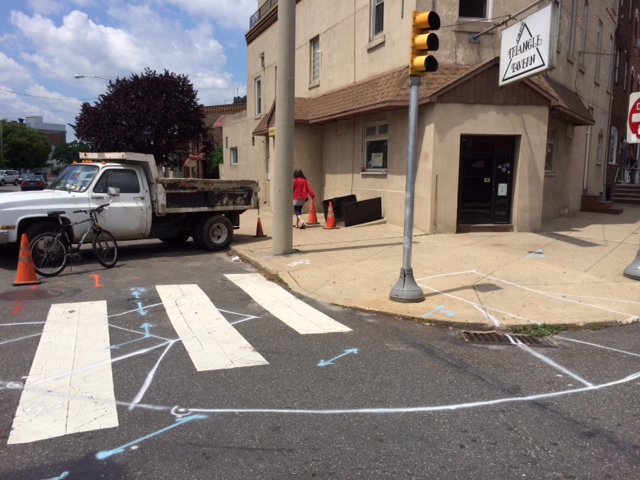 Wonky intersection at 10th to be rebuilt

The city plans to focus on traffic-calming measures

The city plans to spend several hundred thousand bucks to improve pedestrian and traffic flow at the hazardous intersection of 10th, Reed and Passyunk. Sam Sherman at P.A.R.C. said that the city is in charge of the project...